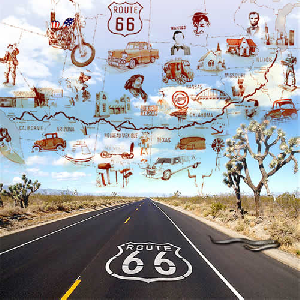 I have driven across the USA a few times but the first time was in the early 1960s. I was living in Montreal, recently married and I felt the urge to move west, to Vancouver in particular.

At the time, there was a program on TV called Route 66 and it featured a couple of guys and their adventures as they drove along Route 66. Although the road itself was real the story was total fiction but it inspired me to the point that I wanted to follow the route myself, with my wife. She was happy with all of this even though my career was going spectacularly well.

I was driving an Oldsmobile, about a 55 model I think. Big, white-wheel tyres, automatic, a real beast. My father-in-law used it as a second car and gave it to me as a present (not quite a present), and a wonderful car it was. I could cruise effortlessly for hundreds of miles at a time down those great American highways.

Starting from Montreal, driving round the Great Lakes to Chicago, then through Ohio down to Texas and New Mexico and across the Mojave Desert to Los Angeles. That finished Route 66 but then I was to drive up the West Coast for 1,500 miles or so, through San Fransisco, Oregon and into Vancouver. About 5,000 miles in all.

We planned to stop over in Carpinteria by Santa Barbara, where my wife's uncle Doug lived. I knew him quite well.

The drive through to Chicago was uneventful. I made it a habit to get an early start so that I could cover a couple of hundred miles before breakfast, that gave us time to wander around if we found somewhere interesting to stop. Of course, there are many places you would like to stop and look around but I wanted to cover 500 hundred miles a day so had to be reasonably selective.

Route 66 was not a motorway in the way we think of them today. You could drive hundreds of miles, fast and sometimes be in completely remote areas. We would drive and then come across a gas station somewhere, and a sign would say, LIVE SNAKES, cobras, mambas, pythons, rattlers. I could never resist these signs and never felt cheated when it turned out to be a small chicken coop with a couple of geriatric snakes not much larger than a big worm!

There was always another stop and another exciting chicken coop, and sometimes they had the real deal - you always lived in expectation! 45 years ago we were less cynical about life and thrilled at these new experiences.

One of the joys of the trip was coming across the unexpected! Although I cannot remember details of most of these little forays if I skip ahead a few years, I was driving across the badlands in North Dakota and saw a sign 'The longest bar in the world - left at the next junction'. This was an irresistible challenge and although I didn't believe it, it turned out to be true - well, it certainly had the longest single bar I had ever seen! Not only that but one part of the side walls (it was a log frame building) had a piece of corrugated sheeting over it. When I asked the owner what it was there for, he explained that a week or so before he'd heard an almighty crashing in the middle of the night. He grabbed his rifle, came down to the bar and saw a massive bear had broken right through the log frame. He shot and killed the bear, and to prove the story he showed me a cutting from the local paper with a picture of him and the dead bear. You felt like you were in the wild west of the 19th century! Fantastic!

Most of the people were friendly, helpful and interested particularly with the way I spoke with my English voice. Not many people had met an Englishman before, except for some of the older men who'd been to Europe during WWII.

Some of the motels were really good, others crap. If we had stopped somewhere to sightsee then driven on until dark it could be hard to find a place to eat but we always seemed to manage. Most of the better motels had their own cafe attached but because we didn't have much money I looked for cheaper places to stay. Then I would find a drive-in or local cafe.

The Grand Canyon was the most memorable side trip. I had to detour to see it but what a wonderful sight to behold! Even though I'm not at all good with heights it was just breathtaking! I wasn't willing to go near the edge but I did get a look through a fixed set of binoculars and you could see along the canyon and the Colorado river below. My daughter went to Las Vegas a couple of years ago and she and her husband flew in a light aircraft right down in the canyon, she said it was awesome!

The roads were long and fast to drive and very straight for long stretches. When we got close to the Mojave Desert I stocked up on cans of water as I kept hearing about cars overheating; running out of water and people dying of thirst. You may laugh, but this was not a time of great sophistication and you could never be sure what might happen. In fact, it was a doddle and we crossed without a hitch!  I did  see a large sign at one point telling me to take a detour for a fast route to LA. Like a mug I took it and ended up going on a long detour through Indian villages and driving an extra 60 miles before getting back on the highway!

At some small places where I had stopped I'd seen, for sale, pieces of petrified wood, polished into beautiful slabs. These could be found in the desert and although I stopped a couple of times to search for the raw material I was never able to find any lying around.

Driving through Los Angeles was great. I had seen hundreds of films about the great city and would have liked to stop over but drove on to Carpinteria. We were keen to get to Doug's place. One of the most amazing things was stopping for petrol! When you pulled in to a gas station young guys and girls would be all over your car, cleaning windows, checking the oil, tyre pressure. It was an eye opener for sure! None of the usual surly people in stained overalls but young vibrant and happy people. And it didn't cost any extra! Quite amazing!

Doug and his family lived in a motel, a 2 or 3 bedroom apartment. It was a stone's throw from the beach and quite fantastic. I had never been anywhere before that had stores open late into the night  - sometimes all night I seem to remember. The Sunday paper from Los Angeles was the biggest, fattest paper I had evern seen, in fact, it still is!

Doug drove a big Buick car and he took us to Santa Barbara where we checked out the boats. Coming first from England and then the cold winter of Montreal it was like entering another world. Warm, sunny days, gleaming sail boats and huge motor boats the like of which I had never seen before, stunning young women and bright eyed young men, you could understand the American dream and want to be a part of it!

Went deep sea fishing off Catalina Island and caught lots of fish. Once back on dry land Doug drove to a trailer park and knocked on doors asking people if they would like some free fish. Everyone seemed surprised at the offer but he got rid of the lot!

Driving north along the coast road with its brilliant scenery was breathtaking for me. Then through the great forest of Sequoia Trees, some of them hundreds of years old. One so massive you could drive through it (I think!!). Up through Oregon and across the border to Vancouver.

What an end to a journey to arrive in a place that turns out to be the greatest city I have ever been to.