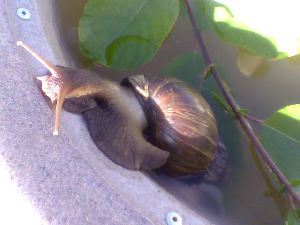 I am the owner of a slightly unusual pet. He's not all that strange really but when I talk about him with most people the reaction is not the same of that for say a kitten or a hamster. I am the proud keeper of a Giant African Land Snail called Bryan.

I know what you're thinking, 'she keeps a snail, that's so disgusting.' Well, you're wrong. When you keep a snail you learn a lot about them and the first thing is that they're brilliant animals. I could spend all day just watching him slime around his tank because, well, he's fascinating and actually pretty cool to look at. The most common problem people have is that snails are slimy, which they are there's no getting around that, but the slime is really easy to wash off of your hands and even off of clothing so that's really no big issue. It's just a poor excuse. People also don't seem to like snails because they think that they're boring, again this is not at all true. Each land snail, believe it or not, has it's own personality, just like us. Bryan knows my voice apart from my parents voices and he responds differently to different people. He has food that he likes and things that he refuses to eat - like cabbage...he's fussy - they have so many great characteristics that people just ignore because they look a little odd.

Land snails like Bryan live for around 30 years if you look after them properly, so they are in a lot of ways as much of an investment as a child, though they're a lot less expensive. All you need is a good sized tank (they will stop growing when they get to a size that is good for their tank so you don't need to worry about upgrading tank size if you don't have much space or money) and they eat almost anything. Weeds from the garden, cuttings from your vegetables, even other snails. I was so excited to get Bryan almost six years ago because I had never previously been allowed to have a pet of my own. They take too much to look after and they cost money etc, but not little Bryan. He is easy to keep, easy to feed and he's really quite cute when you get to know him.

A lot of people are predjudiced against snails, and it's their loss really.